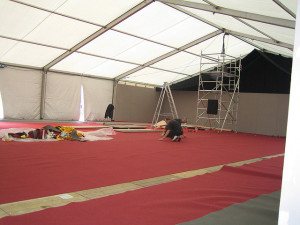 Vintage Church of Metairie, Jefferson Parish, Louisiana, was never a source of neighborhood angst—that is, until the tent came. After merging with another local church in 2010, Vintage’s membership steadily rose.  By 2015, the Church had plans ready to expand its building on Rayne Street.  Before construction began on its existing facility, the Church moved its operations to a heated and air conditioned tent on the Church’s parking lot.  The plan was to provide worship services in the tent until construction was completed in April or May of 2016.

The problem with a tent is—imagine the type used for large outdoor weddings—that although it keeps out the rain and weather, it does not keep in the sound.  According to its Verified Petition For Temporary Restraining Order, Preliminary Injunction, and Declaratory Judgment, community, musical worship and preaching the Gospel are obligations of Vintage’s faith.

During Vintage’s second service in the tent, which began at 9:00 a.m., a neighbor called the Parish Sheriff’s Office, complaining about early morning noise.  According to Nola.com/ The Times-Picayune, those complaints continued, and residents found the noise “very loud in the morning” and “like a rock concert.”  The same article reports that:

Jefferson law caps noise in “residential, noise-sensitive area, public space” at 60 decibels from 7 a.m. to 9:59 p.m., but exempts events that have a permit. A normal conversation is about 60 decibels, according to the National Institutes of Health. That’s quieter than a vacuum cleaner or a washing machine.

Vintage was granted a special-event permit for August and September, with the condition that Vintage not play electric guitars or use drums.  The Parish Council declined to grant a permit for October.  According to Parish Councilwoman Cynthia Lee-Sheng, whose district includes the neighborhood, the October permit was denied because special event permits are meant to be temporary and neighbors made numerous complaints about noise. On several occasions in October and December, the Sheriff’s Office interrupted Vintage’s services and twice issued a summons to Vintage’s Pastor.

On December 10, 2015, the Liberty Institute and attorney Roy Bowes filed the above-referenced petition against Jefferson Parish, claiming violation of Louisiana law, RLUIPA, and the U.S. Constitution. According to the petition, Vintage cannot minister to its congregation without music and preaching. Without a permit, it is also unable to play a video message that it planned to play on each Sunday during Advent.

A December 24, 2015 article reports that the reviewing court declined to grant the Church’s requested injunction.  The Liberty Institute says that it will immediately appeal the decision